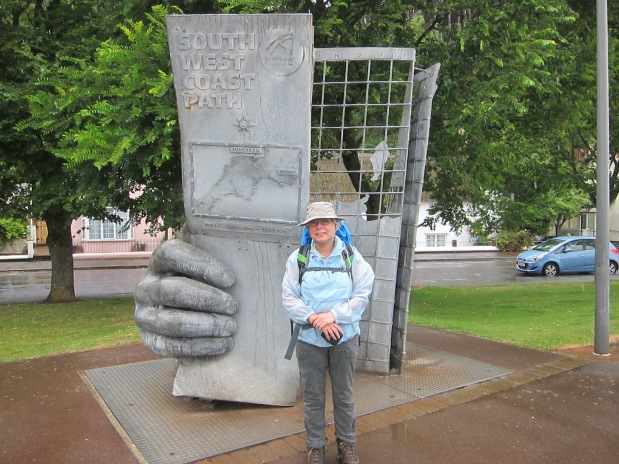 It was just as well we did the little bit extra yesterday rather than finishing at Porlock Weir in line with standard route, as we had to be in Minehead to meet our luggage and catch the bus to Taunton. All the other days we have dawdled, but we managed a respectable speed of 2.2 miles per hour today.

There was a gentle start from picture perfect Porlock across the flood plain, via Bossington, which also looks like it fell off a chocolate box – all thatched cottages and roses rambling.

We then turned into woodland at the foot of the hill, followed by a long, steady pull upwards for at least a mile. Once on the top, we had a choice between the ‘rugged’ path, which went up and down the combes, closer to the water’s edge, or the cliff-top path, with the view. We elected the top path – partly because it would be quicker, and partly because we had plenty of woodland yesterday, and wanted the views.

In fact, there was not a lot to see, as rain set in around 9.45. It was not heavy, but it was persistent and the sea and sky blended into grey. Wales, which we have been able to see for several days, disappeared from view. There were a few Exmoor ponies chomping quietly and quite a few cows. Only heifers though, so no bother with them.

The final 2 miles wound down through woodland again and we arrived promptly at 12.15. We had a quick bite in The Old Ship Aground, which had very kindly agreed to take our luggage in, then a whistle stop photo opportunity at the end of the South West Coast Path before a 10 min wait in pouring rain for the bus. Now on the fast train to Paddington.

Today is my birthday, and I am able to celebrate it with a truly great present – finally completing the South West Coast Walk – 630 miles from Poole. But still only a fraction of my whole scheme!  We covered 7.4 miles.

We had an absolutely superb meal last night, and managed to be in bed by 10.30. It rained heavily during the night, but by breakfast time it was beginning to clear. We walked along the sea front at Lynmouth then climbed up through woodland to the cliff top.

We passed a small church at Countisbury and, since both of us like old churches, decided to go in. Saxon in origin, the church is very plain, and now at quite a distance from any village.

The hymn numbers from yesterday were still on the board. We checked the first, and, astonishingly, it was the hymn I think of as my own – ‘Eternal Father, Strong to save’ sung to the tune named Melita. Of all the possible hymns that it might have been, it was that. I am sure it was a sign – although for the life of me, I am not sure exactly what of.

Rachel, who is a talented singer in one of the big London amateur choirs, began to sing, much to the delight of some German walkers who wandered in. Rather less dignified for Rachel was the failure of her trouser zip. I have been forbidden from adding any photographs illustrating the mishap.

Shortly after, we took a short cut – the kind of short cut that ends in long delays. The Germans were following us, and we compared notes, agreeing that the map suggested a path outside a field edge would bring us back to the main route. We ended up in a thicket of bracken, so dense that we had to give up and retrace our steps to the point where we had left the main path. It must have added at least a mile to the whole day.

The route then dropped down onto a valley, before joining a road a road, then into a long stretch of woodland, the flies were dreadful, crawling all over us, in our faces and hair, and driving us completely potty. We had to tolerate this through several miles of woodland, not compensated for by its general prettiness, lined with foxgloves. We were amused to see a mower of some sort that looked as though it had just been abandoned in the middle of the bracken – the driver was probably driven mad by the flies.

There is a choice of routes here, and we elected to take the upper one along the cliff top. Longer, but easier and slightly more direct, with the aim of avoiding the flies. After several uneventful miles we dropped down again into woodland, and then we entered Alice in Wonderland territory – there were numerous signs for Porlock, but they pointed in different directions – we would follow one, then come to another pointing back in the direction we had come. No matter how far we walked, the signs continued to say 1.5 miles.

At last, we caught sight of the edge of the village through the trees and, ignoring signs, headed for it. Porlock is a lovely little town, and our B & B is gorgeous. I have a vile horse fly bite from our encounter with the cows yesterday. They disagree with me, and it has swollen up into an angry red lump. 14.5 miles