What a difference from yesterday in the weather!  When we started out, it was grey and mizzling and continued overcast until well on into the afternoon. We drov

e down into Gower, and left one car at Port Eynon, before coming back to Caswell Bay.  We dropped down on to Pwll du beach – being very critical of the rather ugly 1960s block of flats that over shadows it. Walking to the end of the beach, it was not clear where the path went – either over a heap of rocks at the end or else up onto the road in front of the block.

Whilst we were deliberating, we saw a couple of brave swimmers – it was still wet and quite chilly, and we were thinking that swimming was the last thing we fancied – suddenly, the man called out – Nick! Astonishingly, the couple had been my sister and brother-in-law’s neighbours in Surrey back in the early 2000s. Talk about a coincidence.  Just proves you cannot go anywhere without running into someone you know.

We chatted for a moment, and asked about any cafes in the vicinity – coffee was feeling like a good plan. Unfortunately, the nearest was an hour away at West Cliff.  We arrived at the excellent café in pouring rain, so spent a good 45 minutes having a delicious Welsh rarebit and coffee. It was still drizzling as we emerged but we were slightly comforted with the thought that the latest weather forecast was for sun in the afternoon.

Back on the path, we went round the headland, and found ourselves overlooking Three Cliffs Bay. The path then deviates into Pennard Burrows – as one might guess from the name, this is a series of sand-dunes – not brilliant for walking in, and easy to lose the path,  but, with the general lay of the land, not possible to get lost, even though you have to go slightly inland, towards a ruined church, as there is only one place to cross the little stream – a series of stepping stones. There were quite a few people about by this time, with dogs and children as the rain had stopped.

Over the stream, and up onto a low headland, than down through woodland with dunes under foot, onto Oxwich Bay.  We met a boy of around 12, who was holidaying with his

We stopped for a drink at the hotel at the end of the bay, then went through the woods at the west end of Oxwich – there is a little church hidden in the woods, dedicated to St Illtyd. Legend has it that the first Christian church was built here in the sixth century – the current building is ancient enough – 13th & 14th century.  Unfortunately, it was locked. 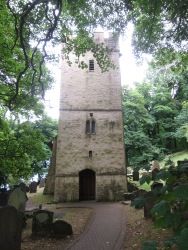 There was a steep pull up to the top of the cliff, but the sun was beginning to shine quite brightly and the views were excellent as we did the last few miles along the beach edge before arriving at Port Eynon. There were lots of ponies wandering about – presumably they wander on the common land like Esmmoor ponies. 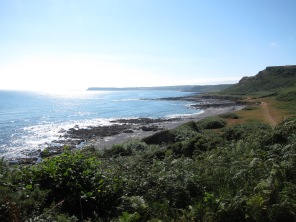 We found a pub, and had a welcome gin and tonic. The pub was crowded, and lots of people were eating. However, the presence of a (used) nappy in its sack on the table next to us argued in favour of a home-cooked meal.  A silver day, with 13 miles covered.