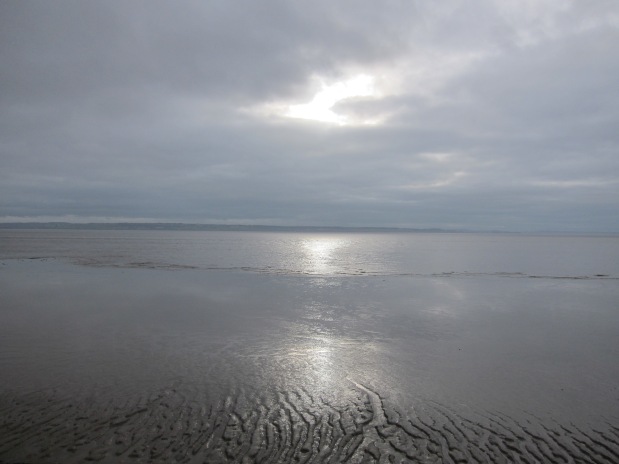 Today was certainly not as exciting as yesterday, but few days are. It was a very straightforward day. I arrived at Severn Tunnel Junction around 8.50, and retraced my steps for about half a mile, to rejoin the path. It crossed back over the M4, then went straight down to the sea-wall.

Looking back, the second Severn Bridge was far more visible than yesterday, despite being overcast. On the far shore, I could see Portishead where I finished at the end of October. It was too cloudy to be certain of any other landmarks.

The tidal range of the Severn river is 12m – the second highest in the world and the result is a wide expanse of mud-flats. There was not a lot of bird life visible, but all the interpretation boards told me the place is teeming with our feathered friends.

The sea wall continued more or less without interruption, before turning slightly inland and then entering the Newport Wetlands Conservation Area, which is also apparently full of migratory species, although almost the only thing I saw (other than a rookery) was a lone adolescent swan. 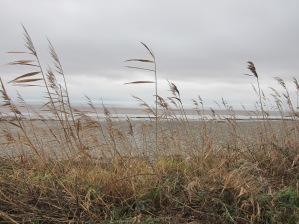 The Wetlands are well-named. For a good ten miles, I was bog-trotting in heavy mud, across a succession of fields, with the odd road crossing. Navigation was more-or-less straightforward, although the Newport district signage does not have the useful yellow tips that is on the waymarkers in Monmouthshire. I missed one sign which, although it only wasted five minutes, had the knock-on effect of making me miss the train at the end by one minute.

The last few miles were on the outskirts of Newport – not a place about which compliments readily spring to mind, although the City Council is obviously trying its best with a new walkway along the River Usk and an interestingly designed pedestrian bridge across it. 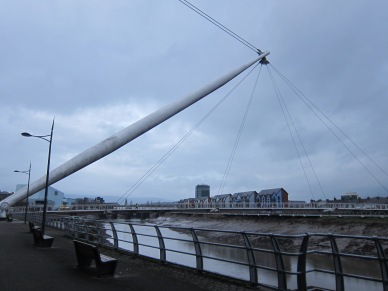 The weather was warm again, overcast, misty and with little wind.