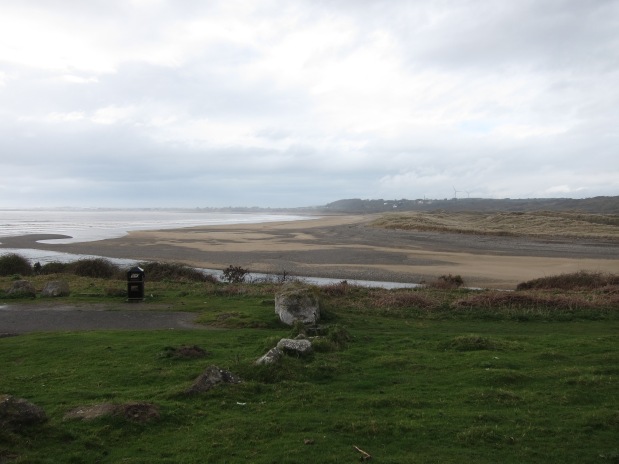 Sunday having fairly limited public transport options, Jane and I had to be at Ogmore to catch the single bus that would take us back to St Donat’s. With my usual need to be everywhere early, we had a good half hour to wait at a place where no bus stop is actually signposted, but where a local farmer assured us it did stop – usually.

After about 15 minutes, a car stopped and we were given a lift a few miles into Ogmore-by-Sea where there was at least an official bus-stop and a lady standing by it looking expectant. Local knowledge proved correct, and the bus did turn up, carrying us through the tiny lanes to the point where I finished yesterday by 12pm. The forecast was not good, and it rained off and on, although not heavily, most of the day. Ther

e was the odd burst of sunshine over the sea, which sparkled silver. The path dropped down to the sea, and up again to the cliffs from time to time.

The mud was knee-deep, and it didn’t take long for me to slip – sitting down hard in a bramble patch. The rest of the day, I trailed mud everywhere.

After about an hour, we passed the lighthouse at Nash Point, and shortly after came to the Nash Point carpark café where I had an excellent bacon roll, and Jane had Victoria sandwich – highly recommended spot!

By and large, the walk was flat, with one or two steep drops down – the greasy ground made it hard going downhill, and my knee is now giving gyp. I hope it will be better tomorrow – if it is not, I shan’t walk.

For the first time more-or-less, since crossing the Severn, the Devon shore was occasionally visible – I could pick out the notch which is Porlock and I think at one point, I could spot Minehead. The coast is beautiful – very steep, vertical cliffs, with visible horizontal sediment structure in the land.  This ability to see the history of the coast’s development make it a Site of Special Scientific Interest (SSSI), known as the Monknash Coast. It is quite unstable, and in many places the land has clearly sheered away suddenly – fence posts hanging over the sea.

One of the prettiest parts of the path was the wooded valley on the approach to Dunraven Castle – sessile oaks, with an understory of bluebells – only a few were in bloom, but it will be a delight in a couple of weeks. There was sweet woodruff and ramsons, too, that Jane picked.

We passed the foundations of Dunraven Castle, built in the 12th century on an old iron-age fort. It was raining quite hard at that point, which continued for about twenty minutes as we came to Aberogwr and turned up the river-valley. The views from the houses which overlook the estuary must be fabulous, when the sun shines.

As we walked up the river valley back to Ogmore, the sun came out, even though it was still raining, and we saw a lovely rainbow. An average supper (although the service was very pleasant) in a pub and then a drive back to Bristol in absolutely torrential rain. Jane pointed out that it would stop as soon as we crossed the bridge into England, and, aggravatingly, she was right.

Another silver day, with 9.5 miles covered. 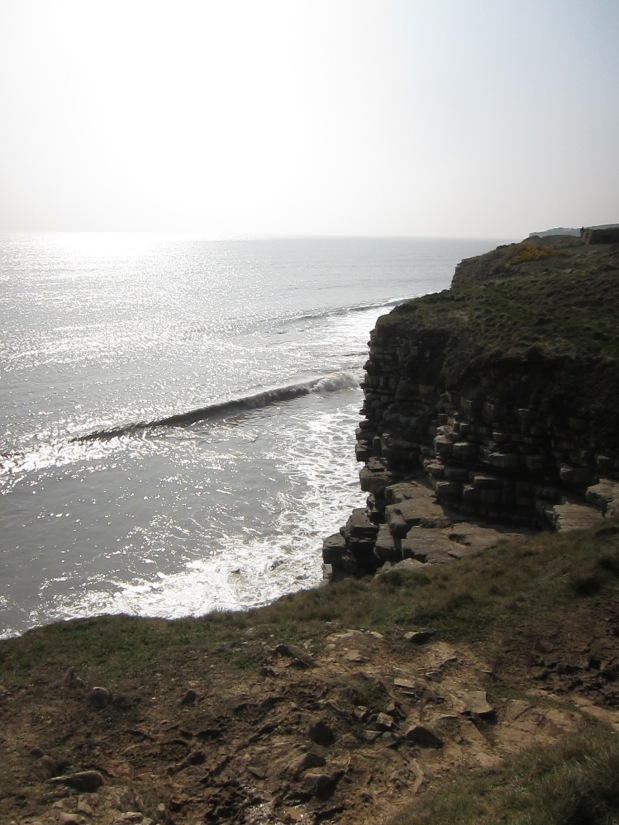 Last night was rather disturbed – the fire alarm for the whole block went off at 2.17am. I grabbed my coat, my slippers, my phone and my keys, as well as the keys to the flat (Jane had stayed somewhere else last night) and spent a few minutes standing in the street, looking like an extra from a bad soap opera – furry slippers, waterproof and nightie: all I needed was curlers. This exciting incident meant I woke late, but it did not matter too much, as there was little traffic this morning, driving back to Barry.

The downside was the thick fog – visibility was not much more than 100 yards.  I drove over the spit to Barry Island, figuring I could ignore the half-mile from the bus-stop I finished near yesterday. Unfortunately, the layout of the roads has changed considerably from my map, with the construction of vast new housing developments. With that and the fog, (not forgetting the poor sign-posting) I got completely disoriented. Eventually, I sorted myself out, and came to the top of the island, a place called Nell’s Point. Of course, it is not really an island, just a promontory, joined with a thin spit of land.

It was still very foggy – but as I walked down the west side, it became possible to distinguish between the sea and the sky, although only because of the wave movement.  Barry beach is beautiful – so far as I could tell – long, wide, flat golden sands. It was somewhat disfigured by the noisy slot machine arcade blaring bad music place at the end – but, of course, everyone has different tastes. I was happy with the Cadawaldrs next door, where I was able to buy an excellent coffee. As I returned towards the spit, I saw that the tide was way out, so was able to walk across the harbour, rather than going back to the bridge – it was a bit of a scramble down, and the sand was heavy, but it made up the time I had lost.

I walked around The Knap, another promontory, then climbed up onto the cliffs. Behind me, I could hear two women chatting. Eventually, I entered a wood, and waited so that I could ask them to take a photo. We got chatting – they are walking the Welsh Coast Path, but, like me, not all at once. One has a son with realistic ambitions to play rugby for Wales (Yay!!) and the other has a daughter who is a contestant in the Miss Wales contest. We walked together for a good half hour, and it was lovely to make new friends.

Gradually, the cloud cleared and the sun came out, although it was not till the very end of the day that the Devon shore was vaguely visible

The path runs along the coast, occasionally climbing up and down, with

a couple of places where I had to clamber over cobbled beach.  passed the southern-most tip of Wales at Rhoose Point, and saw some interesting geological features.

The path passes a very large and ugly power station, where I was concerned that I was on the wrong side of the fence as the path was several inches deep in water at one point.

I hopped over the fence, but soon had to climb back as there were private property signs liberally scattered.

The path went inland for a bit, over fields, before dropping down to another cobble beach below Llanilltud Fawr. The evening sun was shining by now and the sea looked rather inviting.

I realised that if I moved swiftly, I would catch the 17.12 bus at St Donat’s – I hurried too much, and saw the 16.12 bus chugging away, and had to wait nearly an hour. St Donat’s is the location of the Atlantic College – it is a delightful little hamlet. Meeting new people has turned this day into Silver.

It’s nearly four months since my last walk, but the weather has barely improved. The spring has been absolutely sodden – with consequences for my boots. I had forgotten that the last walk I did, in January, was on the Icknield Way in Suffolk, with my friend Jon. The ground was so boggy that every few steps we had to lean on each other to try to shake the mud off, as it was so heavy it was almost impossible to lift our feet. Unfortunately, I had slung my boots in the back of the car, then gone on holiday and forgotten to clean them. The result, when I got them out was that they were solid mud – almost like plaster casts. 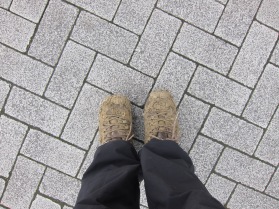 I left home later than I intended, but had a good run, and was walking away from Cardiff Central Station, where I parked, around 11.40 – a few minutes to get myself facing the right way, as there are several exits, and I was off.

I walked back down to Cardiff Bay – the development there is amazing – Yr Amgueddfa Genedlaethol (National Museum) and Y Seneddd (Assembly building) are both architecturally interesting – the former is an absolute gem in copper and slate.

I walked along the Bay front, and across the Barrage. Here were lots of people around – it was grey, but not wet or cold.   The barrage takes you into Penarth, where there are some rather nice houses with sea views.

The walk itself was not particularly memorable – lots of road walking, and even those parts on the shore were easy going. There was very limited visibility. At one point, I could see Flat Holme and Steep Holme, the islands in the Severn that had looked so clear from the Devon shore.

The best part, was the enormous quantity of daffodils- it has been a great year for them – cultivated ones, but also the lovely Lent lilies- some early bluebells, as well – the worst was mud.

There was a long, dreary walk on the main road into Barry, then a short element close to the docks. I was tired by this point, having got up at 5.30am.  I saw a bus-stop, and thought it was time to head back – before I was there, the bus arrived. I began to run and waved frantically. The lovely bus driver stopped for me, although I was still 100 yards short of the bus -stop – you wouldn’t get that in the south-east.

A tour through the backs streets of Barry, Penarth and Cardiff brought me back to the station, and a drive down to Bristol to stay with my friend Jane finished a Bronze day.