Several firsts today – the first day of an extended walking trip, the first sight of the open sea – previously I have been in the estuaries of the Thames, the Medway and the Swale – and my first 100 miles completed!

Work has been manic so I had a few chores to do before leaving, and what with one thing and another, I didn’t actually set off from Faversham until about 12.15.  It was great driving over the Dartford Crossing – I took a quick glance down (I always have a faint sensation of vertigo on that bridge, as it is very high, with quite flimsy crash barriers, and the curved shape gives the impression almost of flying)  a

nd saw the aggregate works that Bridget and I had walked past back in January.  It took a pleasing hour to get from the crossing to my start point!

I saw more of Faversham this time – it is a pretty town, with a number of Tudor houses still standing,, and the traces of the Norman priory’s walls still visible as well as an interesting mix of pleasure boats and Thames barges bobbing on the creek.  Apparently, much of the prosperity of the town (after the dissolution of King Stephen’s 1148 Abbey in 1538) was based the development of the gunpowder industry.  The path then follows the East bank of the Oare Creek, barely a stone’s throw from the walk into the town that Deb and I did a couple of weeks ago.

The weather was fine, but the wind was bitterly cold – the first time I have actually felt cold since I began.  Apparently the temperature was 3 degrees, but the biting East wind made it feel much lower.

As I walked on towards Whitstable, the Isle of Sheppey receded, and I was faced at last with the open sea.  Whitstable is very attractive – with more oyster vending establishments than I had imagined possible.  Unfortunately, I don’t like oysters, so did not sample any.

The path clings to the coast all the way.  On the inland side, there are rows and rows of beach huts, all the way from Seasalter, through Whitstable to Herne Bay.  Very little sign of them being in use yet, this year!   It was fun to read the names – everything from Dunroamin to the Tardis House, via Jabba! Far in the distance, out to sea, is a huge wind farm.  I know they are not to everyone’s taste, but I rather like them. 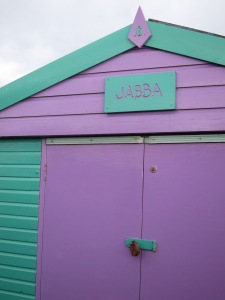 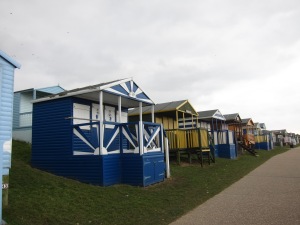 I reached the station at Herne Bay around 6.15pm, and took the train back up to Faversham, driving to arrive at my extremely stylish (not – unless you like receptionists who are top to toe tattoos with a phantom fag hanging from the bottom lip) around 7.45.  I ate in a local Indian restaurant, and was delighted to find a Welsh speaking ethnically Indian waiter from Swansea.

North PembrokeJuly 31st, 2019
Hoping to squeeze in another few days in July.