I escaped from the Irish landlady after being grilled at length about yesterday’s activities – fortunately, another new guest came into the breakfast room and need to be interrogated about his work, his home, his wife, children and ancestry, allowing me to nip out.

I emerged into a completely grey atmosphere, with a strong east wind blowing a fairly heavy snowfall up and down the promenade.   I walked the mile down to Margate station to meet Rachel, and, happily, by the time we set out at 10.15, the snow had stopped and the sun was beginning to shine.  We walked along the beach front through Margate and Cliftonville, varying between walking on the sands, the elevated promenade, and, occasionally, when the sea came too close, climbing the stairs to the cliff tops.

Far out to sea, we could see the North Kent wind farm, and a stream of container ships.  The sky became black and we were battered for about 15 minutes with a vicious wind and stinging hail.  As we passed the north-eastern tip of Kent at Foreness, and turned south to Kingsgate and Foreland, the wind eased.  We stopped for a quick cuppa and handful of nuts in a pub car park in typical British holiday maker fa 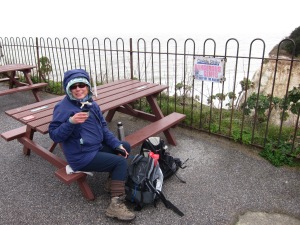 The cliffs became whiter and higher as we walked on, looking like the classic iconic view of the White Cliffs.  We reached Broadstairs at lunch time and stopped at a pub on the beach (see review) and then continued along the front to Ramsgate.  Definitely classier than Margate, Ramsgate has a largish harbor with a mix of yachts, speed boats and cruisers.  With the sun shining down it was almost tempting to put to sea. 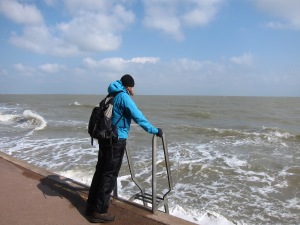 On past the sands at Pegwell Bay, we went, with the sun now shining quite strongly. 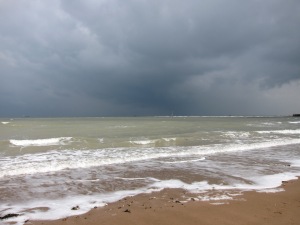 The last 2-3 miles into Sandwich were a trudge, beside a road and through an industrial site, but we were rewarded with the lovely Cinque Port town of Sandwich, with its ancient tollgate and superb mediaeval buildings.  We fell into the first pub for an excellent supper (see review) and then got a taxi back to Margate.  The driver was another character.  One of the few women taxi drivers I have met, she drove like a maniac and made my Irish landlady seem quite reticent in asking personal questions.  However she didn’t just ask questions but shared an awful lot of information as well.  I learnt that she knows Tracey Emin, that, very sadly, she was abused as a child and the perpetrator got 2 years in gaol.  She is married to a Muslim who is very moody, and that she would like to travel across America.  Exhausted, I got back to hotel Salubrious at around 8.30.