Today was planned as a shorter day, after the last two quite long days, however, it was one of the hardest days so far, because of the very hilly coast around Hastings.  The weather continues dry, although there was a brief snow flurry at the end of the day, and the wind is sharp.  For much of the walk we were sheltered on the north side, so did not suffer too much from the breezes.

We set out after a late breakfast in our favourite Dover café, followed by a drive back to Rye.

We continued to follow the Royal Military Canal path, which overlaps in part with the Saxon Shore Way.  After some 3 miles of walking (down Dumb Woman’s Lane!!) we reached the gorgeous town of Winchelsea, up on a bluff, overlooking the coast.  The town itself, once directly on the coast, still has three mediaeval gates, and the remains of St Thomas’ Church, destroyed by the French in the middle ages.  We stopped for lunch (see review) then continued along the flat canal path to Cliffs End on the coast.  This is where the pain began! The path climbed up to Fairlight (a very dull dormitory town of bungalows, reminiscent of the older suburbs of Sydney with pristine bungalows and elderly men mowing already neat grass) and then to the top of the cliffs at the Hastings Country Park. 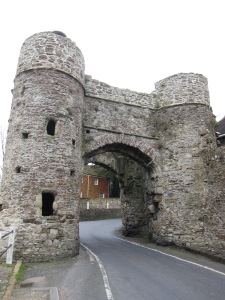 For 5 miles the path climbed up a cliff, then dropped sharply down to a ravine, then up another cliff, and down again.  Bridget’s feet were suffering and my knees were getting very fractious by the time we arrived in Hastings.  The old town has some rather nice buildings, including some interesting sheds which apparently are used for making, storing and drying fishing nets, but the majority of it is faded Victorian seaside with amusement arcades at every turn.

I have now completed the whole of the Saxon Shore Way, from Gravesend to Hastings.

We took the train back to Rye, where we had an excellent dinner, before returning to Dover for our last night in Gulag Towers. 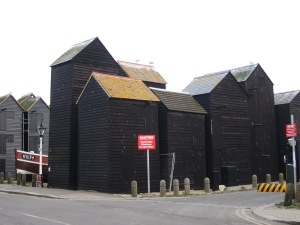 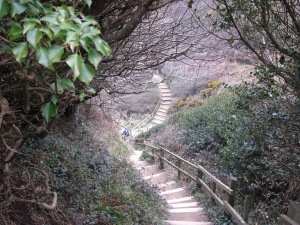