I have a confession to make, which will shock the purists amongst you.  I have done today’s walk out of order!

The original plan was to go back to Bournemouth on the train and walk to Swanage, but as I was showing the maps to Liz, Jane and Vicki, my walking companions of old, I let slip that the following section, Swanage to Kimmeridge, would be prettier.  Liz suggested that we do that first, as not all of them will want to walk tomorrow.  There was a stunned silence as the others saw my horrified face – walk out of turn?  How could I possibly do that?  My whole scheme would go to pot! However, after I had had a snort (or two) of brandy and been patted on the back I thought about it and decided that I need to get grip on these OCD tendencies before I turn into one of thos

e people who constantly wash their hands and run home to check if they have left the gas on.  I took a deep breath and agreed.  In return, I bargained for setting off at 9am.

We are staying in a very nice hotel, The Pines, above Swanage which gives straight onto the South West Coast path.  We meandered through the town, stopping to chuckle at the Punch & Judy booth and admire the boats bobbing on the fairly stiff waves.  The sun had come out after a very wet night, but the wind was still fierce.  Just out of Swanage is Peverill Head.  A wonderful vantage point from which the needles at Studland, and the sweep of the whole bay is visible with the various headlands stretching west also visible.  This was followed by Durlston Point where there are all sorts of informative displays about the development of the earth and the time and tides although we were flummoxed by the information on the convexity of the earth. 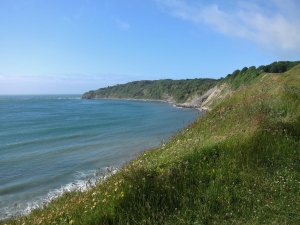 The wild flowers were an absolute delight – valerian, thrift, buttercups and yarrow everywhere.  We travelled gently along, stopping for photos and to admire the view.  A fellow walker pointed out some puffins bobbing on the waves, but I could not see them.

There were traces of Purbeck marble quarrying everywhere, with old mine adits and scary caves with narrow columns that did not seem strong enough to support the cliffs above them.  To say the walk was undula

ting would not do it justice.  We passed the light house at Durston and the Coast watch at St Aldhelm’s Head, but did not stop to look in the chapel (Vicki and I having been their previously on our one and only attempt at camping – my psyche still bears the scars.) There are a couple of ridiculously steep drops down with almost vertical climbs back up that had the wind whistling through our lungs.  The countryside is superb, with beautiful Purbeck stone dry walls and pretty farm houses.  Even the cows were picturesque Jersey rather than grumpy Friesians. 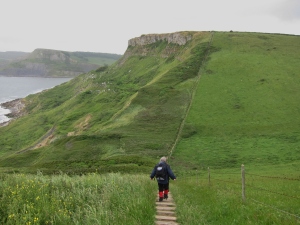 After an unintended detour to Chapman’s Pool, we got back on the path, only to find that it was closed between that point and Kimmeridge.  Some young lads had walked it, despite the signs, but told us that the route was very narrow in parts.  Vicki and I have  no head for heights, and with us all having form for getting lost on mountainsides, we decided on discretion and walked up to Kingston, where we found a delightful pub (though the service was a little slow) and had puddings overlooking Corfe Castle.

The Isle of Purbeck feels completely different from any of the previous places I have been.  The countryside is more rolling and wooded and the architecture is gorgeous: houses of white Purbeck stone nestled into the valleys.  I feel like I am in a quite different part of the country from Bournemouth, even though it is the same county.  This feels like the South-West, rather than the South.