Today’s weather was almost the opposite of yesterday’s, warm and quite sunny during the day with an absolutely tremendous squall towards the end of the day that left us soaked to the skin.

I met Tom and Chris at Canewdon, and then we drove back to Rochford to continue walking along the banks of the Roach, but this time on the north side.  I was thinking how unpleasant the name “Roach” is, but Tom assured me it was named for the little fish, rather than the scuttling insect, which made me like it better – although it would be more interesting if it were named after the illegal substance…. perhaps all of the fishermen of Rochford sit on the banks in the summer puffing away on bhang.

The path continued much as before, up on the embankment a few feet above the salt marsh, which had a tasteful collection of shopping trolleys and old junk visible nearer the town.  There were very few houses, but quite a lot of boats out in the main channel, which Chris and I recognised from yesterday.  To break the day up, we stopped at the village of Paglesham Eastend for lunch.  There is a little boat yard there and we were delighted by a half rowing boat that has been ingeniously turned into a little sheltered view point.

The pub was run by an absolute dragon of a land lady who was extremely harassed by the Sunday lunch rush.  We were so intimidated we had to take it in turns to make our various requests as each of us had to retire after receiving what Pooh might have referred to as a very hard stare indeed!

Munching on our excellent roast beef sandwiches outside the pub, we got chatting to a gentleman who seemed to know a bit about everything.  He and Tom were soon deep in a discussion on the military tactics of Boudicca.  This meant we left the pub a little later than intended, but as the day was only 15 miles, it didn’t matter.

Striking back to the water’s edge, the path runs north for a mile or two then turns west into the estuary of the river Crouch.  This is wider than the Roach estuary, but otherwise practically identical.  We could see Burnham on Crouch on the opposite bank.  Because of all the inlets, one can see the sails of ships without the water being visible – it is quite strange, the sails seeming to be rolling along the land. 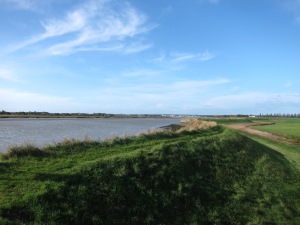 We could see Canewdon church tower on a slight rise to our left, at least, we could see it until the sky turned inky black and the heavens opened.  Even my rainproof trousers eventually sank under the weight of water and began to seep.  The rain shower lasted for about half an hour, then gradually wore off as we walked up the slight rise into Canewden.  There was just time for a swift half in the pub there before heading home.