I think I have seen more varied scenery today, than any other day. The distance was modest compared with yesterday, but that has taken me through pretty villages, past bleak nuclear power station, over heath, woodland, farmland, a ruined friary and marsh.

I began around 9.15 in Aldeburgh, interestingly spelt Aldbro on the milestone in the high street (London 94, Wickham market 12). I took lots of pictures of the high street, and particularly the Moot Hall, built in 16th century for the Town Hall, and still used for that purpose today. Since it was only 9.30 on Easter Day with a biting cold wind, I had the place pretty much to myself except for the fresh fish stalls and the super-keen runners.

The beach is flat and shingly, but fortunately the land side has enough build-up of soil and grass to make it walkable. It is not exciting scenery so I made fast time to Thorpeness, where I stopped for coffee and a Hot Cross bun in a cafe overlooking the village pond. Most of the other patrons were Londoners and I heard a good deal about “my mother’s friend’s art gallery in Fulham” and “the affordable art fair in Battersea”, now becoming “unaffordable”. This was interspersed with “Olivia, don’t do that” and “Sebastian is doing so well with his violin.” I don’t think my muddy boots, rumpled hair and generally wind-swept look were quite what they were used to and I felt no compulsion to hang around.

Leaving Thorpeness, there is no defined path along the beach, and I could not face more shingle, so I followed the Suffolk Coast and Heath path inland for a bit, along an old byway over heathland, covered in gorse. This took me into the largest pig farm I have ever seen. Hundreds of sides of bacon on the hoof, each with its own little Nissan hut shelter. Being spring, there was plenty of energetic courting going on.

Eventually, the path turned back towards the shore, and after passing through some light woodland on the cliff top, below an old hall, it dropped down to a very bleak grassy, sandy stretch running in front of huge Sizewell Power station. It looked quite as sinister as Bradwell, back in Essex, with a massive dark grey concrete monolith in the middle, flanked by slightly less sinister buildings with windows, and a futuristic geodesic hemisphere. The surrounding land is, strangely, a haven for wildlife, and the next eight miles were over sites of special scientific interest and nature reserves. I can’t say I saw anything more exotic than seagulls and a few magpies today.

The path climbs away from the sea up towards Dunwich, famous for its cliff fall. First, the route goes over a vast heath with all sorts of heather and gorse, with twisting sandy paths cross-crossing it (part of the Sandilands Way). It then goes through light woodland and into what is left of the village, past the ruins of a Franciscan friary, founded by Richard Fitzjohn and his wife Alice, in the early thirteenth century, then moved inland to its current site in 1289 by the burgesses of Dunwich but is only yards from the cliff edge now. It was dissolved in 1538.

I then followed the road for half a mile through the village, with some rather nice-looking pubs, before joining a wide track with wood and heath on either side. In due course this leads to Walberswick Marshes containing the biggest expanse of reeds I have ever seen – over five foot in height they spread in all directions, with the grey sea just visible from higher ground. Boardwalks have been formed, and one can meander through the reeds in all directions. I headed straight for the quay at Walberswick, where I had another great ferry trip. The boat this time was a small craft, seating about eight plus the oarsman, who was, in fact, a young woman. She was doing a roaring trade (although the fee was only 90 pence), but it wasn’t easy work, steering across a fast current on a very windy day. http://www.visitsouthwold.co.uk/articles/17728/Walberswick+Ferry 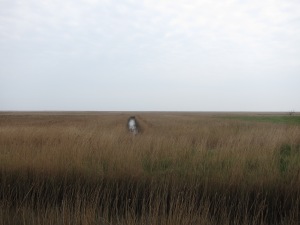 On the north side, one can opt for the inland path or crunch over the shingle into Southwold – I went for inland. The town was heaving. I stopped for a quick drink, then got a taxi back to Aldeburgh driven by a fairly elderly Greek chap, who has lived in Lowestoft for a m 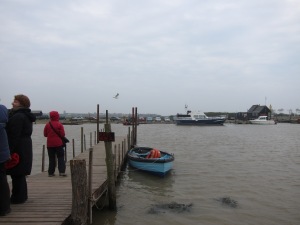 ere three and a half years, but it hasn’t taken long for him to become a stereotypical taxi driver with tales of scroungers and benefit cheats…..

I had dinner back in Aldeburgh (see review) and am now cosy in my B&B.

Distance was 15.5 miles at an average of just under 2.6 miles per hour.