Today was an excellent finish to the weekend. My original plan was to go as far as Cromer, but on consultation over game pie in the pub, we decided that that plan lacked ambition, so settled on Sheringham as the day’s destination.

It was an absolutely glorious morning, and we worked

up an appetite for breakfast by taking a brief detour to the ruined Cluniac Priory at Bacton. The sky was vivid blue, enhancing the white stone of the ruined Romanesque building. We couldn’t get very close, as it is on private land, but the old gatehouse was accessible. The local architecture relies very heavily on walling of flint cobbles, and the gatehouse and surrounding cottages were largely constructed of this, with stone or brick quoins.

We set out along the beach around 9.45 am. The tide had not fully retreated, and as the coast is very uneven in the amount of erosion that has taken place, there were points when we were dashing across the sea wall between waves – not always successfully. I got a good shower at one point.

What I had taken yesterday to be many different types of stone on the beach turned out to be almost all flint, in various states of erosion. I did not know that flint could come in so many different shapes and shades, having assumed it would all be shades of black and white. Tom was hoping to find some amber, which apparently is not uncommon on this coast, but had no luck. The cliffs were climbing in height to a couple of hundred feet, mainly of very soft sand and clay with frequent landslips.

There were various types of groins, one sort being built in a type of zig-zag, known in East Anglia, Tom informs me as “crinkle-crankle”.   What a marvellous new word – I shall be looking out for opportunities to use it in conversation. 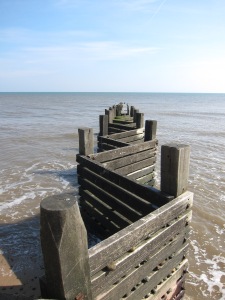 There were lots of people and dogs about. I have noticed that everyone in Norfolk seems to have at least two dogs – the one dog family was rare.

We saw some turnstones, a couple of oyster catchers and a bar-tailed godwit, but not many birds overall, not even many seagulls.

The sun was out and the wind remained light, and from the west so it was very pleasant. At one point we had to scramble round some very soft clay-ey rocks, much to the detriment of boots and trousers, but the walk was not demanding. A sandwich of the famous Cromer crabs was had in Overstrand, just to the

east of Cromer, accompanied by excellent Norfolk Apple juice, then a brief stroll took us to the prom at Cromer. Cromer is a very traditional sea-side town – early nineteenth century housing on the cliff tops and a pier from the early twentieth century. There were plenty of traditional sea-side venues and just enough wind to make sure of red faces.

We passed the Beeston Bump, at 207 feet the highest point on the Norfolk coast, just before arriving in Sheringham in time for the 17.42 train to Norwich. A delightful 14.75 miles, which has taken me well over 800 in total.