Another lovely day, although it did not start out very promising. After a rather low grade breakfast, Bridget and I stepped out into heavy rain to meet Chris and Rita at 9.30 back down on the front at Wells. Foolishly, I did not have my waterproof trousers on, and by the time I had gone 300 yards, my lower half was soaked. I found a covered area and struggled into them, just as the rain turned torrential. Bridget and I hovered under shelter for a few minutes, then, as it eased off, went on to meet the others. The weather was so appalling that I told them all I was quite happy to go on alone, and that I wouldn’t feel at all abandoned should they decide to do something more appealing than walk for 20 miles in a downpour, although I was sure that the sun would come out shortly.

Bridget and Rita elected to meet us later, but Chris valiantly stuck to Plan A. I promised it would be dry by 10am and sunny by 11am. He looked doubtful, but pretended to believe me. We walked along the old railway route directly north out of Wells for the best part of a mile. There is a little cafe at the end, and, since the rain had stopped, just as I promised, we went in to dry off and have an excellent coffee.

The Norfolk Coast path here runs though the Holkham estate, one of the biggest private estates in the country. Around 150 years ago, pine forests were planted by the estate as sea defences, and the path meanders through the woods, with the sea some quarter mile further out beyond the dunes. 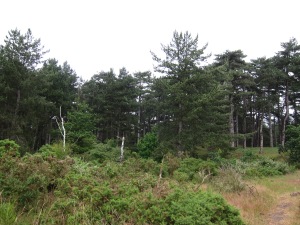 The weather improved, and, as I had predicted, at ten to eleven the sun broke through and the sky became blue and clear, although there was still a brisk wind. Once through Holkham woods, the path winds inland to a small village called Burnham Overy Staithe. Staithe is a northern or eastern word for a landing stage, and many of the small villages have them. Burnham Overy’s claim to fame is as the place where Lord Nelson first learnt to row and sail, before joining the Royal Navy as a Midshipman, aged twelve.

We walked on towards Brancaster Staithe. The countryside changed completely again – a raised ridge with marsh all around.

There was another great feast of seabirds. I am practically becoming a twitcher! I have seen so many egrets now that I am becoming quite blasé about them. There were also lots of oyster catchers and something else that we could not identify for certain. A similar build to a swan, but fawn in colour. We though it might be a grebe (or rather several as we saw more than one) but we could not be certain  as we were too far away to see if they had crests.

All the while we walked along the ridge we could hear the wind rustling the miles of Norfolk reed beds, used for thatching since ancient times.

In Roman times, Brancaster was on the sea front, and an important fort on the Saxon Shore, the line of defences built, according to a common (although disputed) theory, to keep the Saxons from invading Britain. The sea is now a good mile further out.

About a mile out of Brancaster Staithe we were met by Bridget and Rita, who had found a good pub where we returned for lunch. Chris and I left at around 3.30 and carried on through to the main village, along a raised boardwalk through the reed beds.   We then continued along the road for a bit -the Norfolk coast path goes inland here, but we kept a bit closer to the sea, although it is far out beyond the salt marsh at this point. The sky looked very ominous, but, fortunately, it did not rain again.

I was beginning to tire – my left knee has been a bit temperamental today, following walking on shingle yesterday – not helped by stepping into a hole and jarring it. The salt-marsh and reeds receded and we back down by the beach, walking over sand dunes and rough marram grass. Fairly hard going, but lots of it has been boarded, so not too much of a struggle. Just after Holme-next-the sea, we met Bridget who had parked at Hunstanton and walked to meet us – another half hour along the dunes, and then the welcome site of Bridget’s car in the car park at the edge of the town. I am going to confess to a little cheating here as I begged a lift for the last mile to my B and B. I have now completed the whole Norfolk Coast path – 45 miles from Hunstanton to Cromer, taking 2.25 days. Today’s total was 31.4 km – 19.6 miles.