I had an appointment in North Lincolnshire, so I grabbed the opportunity to come down to Skegness and finish the walk from the Bank Holiday weekend. My friend, Graham, who has heard a good deal about the walk, but so far has not taken part was, conveniently, free to come over from Nottingham, so he joined me here last night.

So, Skegness. Well, what can I say? And Skegness on a Saturday night, too! I wish I could say that we rode the roller-coaster and partied in the tasty night-clubs till dawn, but, sadly, not. We went for a very sedate drink and snack in the same hotel Rachel and I stayed in last time, but did not have the opportunity to admire the Bollywo 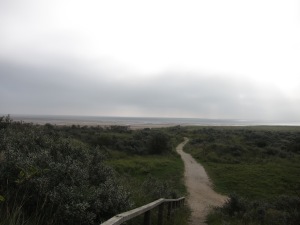 This morning, I drove down to Gibraltar Point to pick up the path opposite the frustrating locked foot-bridge. For the first time since turning inland south of Hunstanton, I could actually catch a glimpse of the open sea. Not for long however, as the salt marsh has built up here into a huge nature reserve. It took the best part of an hour to reach the Clock Tower in Skegness where I had arranged to meet Graham – he declined to get up early and join me at Gibraltar Point, as, he informs me that he likes a leisurely breakfast. 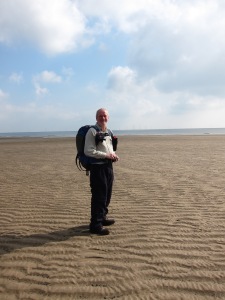 Skegness was rather quieter in the day than it had been the night before. We walked down to the sea front, and at last I could see the ocean. The beach was golden and smooth, absolutely glorious. The weather was kind, too as we walked along the South Bracing, and then the North Bracing – I am sure the names are usually reflective of reality, but today they were not.

We divided our walking between the promenade and the sand close to the sea. The prom is hard under foot, but conducive to swift progress. The sand is slower and ruinous to boots, but pleasanter under foot when just above the water line. 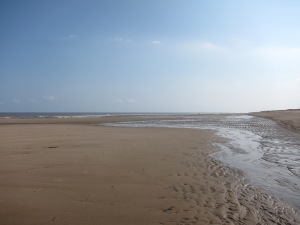 We did not see much of any remark on our trip – there were lots of people around, children determinedly bucket-and-spading on the last day of the summer holidays. We marvelled at the terrifying rides at the funfair we passed. The roller coaster was shockingly high and steep, and I started to feel sick just watching people hanging upside down. 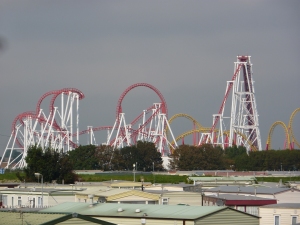 Sadly, many of the cafes and buildings along the front for the whole stretch to Mablethorpe are rather unattractive – concrete and corrugated iron with neon lights, garish colours and EXTREMELY LOUD MUSIC. Still, I suppose tastes differ and everything cannot be a twee tea-shop.

Sutton-on-Sea has set its face against modern development, but was not outstandingly attractive – some unusual beach huts – the roofs look rather pagoda-like in shape. 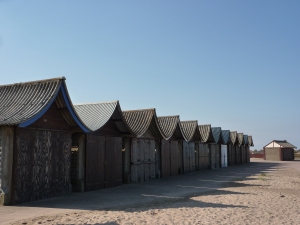 After an easy day, we arrived in Mablethorpe around 4.45pm, having done some 18 ½ miles. We were in time for fish and chips before catching the bus back to Skegness.