Today was another glorious day. I really do love North Cornwall. I think it has overtaken Dorset in my favourite English counties. But definitely North Cornwall, rather than South which I didn’t especially like – although that might have been the bag carrying…

Last night we walked into Padstow from our excellent B&B (called ‘Tamarisk’ and run by Betty – definite recommend). We decided that we: a) would not eat in the most expensive place – meals here are equal or more than London prices, and it can’t be transport or staff  as they all claim to serve local produce and wages are low; b) would not eat in one of Rick Stein’s numerous places – not that we object to Mr Stein but after a day’s walking even following a shower and change we don’t really look the part, and c) we would not eat outside. The wind was very sharp and we had spent all day outside. So we went to Rick Stein’s Bistro, ate in the garden and paid a very fine price! But it was an excellent meal.

In the morning, we took recommendations from B

etty on pasty shops and waited for 20 minutes for a gluten free batch to be finished for Jon.  We then hung around Padstow harbour waiting for the ferry across the Camel.

The first section of the walk was easy, from Rock on the east of the estuary to Polzeath where we had coffee. The weather was very fine, quite hot in fact and copious applications of factor 30 were required. Stephen, after feeling rather tired yesterday was full of beans today and in full snipping mode. I can’t remember whether I have mentioned that as an act of selfless public good, Stephen walks with a handy pair of small secateurs and clips over-exuberant brambles from the path.  It is a treat to walk in his wake with nothing catching at hair or legs.

From Polzeath the route became progressively more difficult, with a number of ups and downs. We reached Pentire Head around 1pm and stopped to eat our pasties, still slightly warm inside mmmm. The views were absolutely superb, particularly at the eastern side of the headland. Apparently, it is possible to see Tintagel Head, and possibly even Bude, but it was not clear enough for that.

Port Quin a very narrow inlet, also owned by the National Trust, was impossible to see until you were on it. We had promised ourselves ice cream when we reached it, but there was only a tea van with a very grumpy lady in it, who shut up shop promptly at 4pm.

From Port Quin to Port Isaac is somewhat over 3 miles, and a very steep three miles at that. The path drops and rises precipitately, with steps cut into the cliff that look as though they will drop right down into the sea at various points. 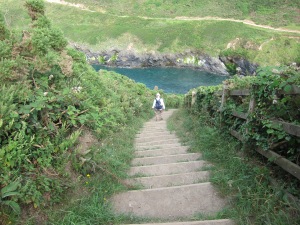 We toiled and moiled slowly along, reaching Port Isaac, which is delightful, except for the stony beach. After being turned away by several restaurants (they claimed they were full, but I fear they thought we would lower the tone), we had an excellent meal in the Golden Lion pub, before ascending yet another hill to our B&B.  Today’s distance was 12 miles (20km).