Today was quite a contrast to yesterday!  I left the rather lovely Air B and B I have booked, with the idea of leaving the car about halfway between Abertawe and Mumbles. Nick, my brother-in-law from Australia, was due to meet me mid-afternoon, so the plan was to walk half-way, then meet him back at the house and continue.

I duly parked, and waited for a bus. And waited. And waited. According to the timetable, they passed along the road every  half hour, and I saw two come along, and turn up the road just before the stop I was standing at. I wrestled with downloading the timetable again on my phone and concluded that the bus I wanted did not run on a Sunday (atlhough the whole site was rather vague on detail), so I drove into Abertawe and parked by the station again. A good hour wasted!

But it did not matter – the weather was warm, and although I was feeling somewhat battered about the legs after yesterday, I was in good spirits. I walked down through the shopping area of Abertawe, past the ruins of the Norman castle, and into the bay area. This has been renovated in recent years and is a rather lovely marina. There were hordes of people around, apparently a charity run is in progress.

I fought my way against the tide of runners, and along the marina, coming out onto a short passage of sand-dunes, before the beach.

It is a superb beach – I am amazed it is not a more popular holiday destination. The sands are flat and golden, with a long tidal range.  I walked steadily for a couple of hours, soothing my scratched legs in the clear water, before climbing back up onto the cob and finding a bus that was actually going to Swansea. I picked up the car, and went back to the house, where I met Nick.

After a swift lunch, we dropped one car off at Caswell Bay, just beyond Mumbles and took the other back to where I had caught the bus. Proceedings got off to a good start with an ice-cream from the local dairy.

Again, it was a leisurely walk – the beach at this western end of the bay is much less attractive – quite a lot of rather smelly mud, so we walked mainly along the promenade, into Mumbles. We could see the lighthouse on a promontory, off the beach below – there were steep stairs going down, then up again to the lighthouse rock, but much of it was inaccessible. The lighthouse was built in 1794, and re-engineered in 2017 to be LED lit. The other famous feature is the pier, with the station from the old Swansea-Mumbles railway – the first railway in the world that took paying passengers. At that time it was horse-drawn, but converted to steam-power in 1877. Always a popular holiday destination, Mumbles was described by Dylan Thomas as ‘a rather nice village, despite its name’. 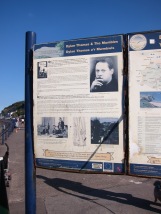 The town was chosen by The Times newspaper as the best place to live in Wales in 2018 – personally, I preferred the beach at the Swansea end of the bay, but it is certainly a charming town.

The path then climbs up onto a headland, over the golf course and in the late evening sun we could see far away to the headland above Oxwich.  A thoroughly enjoyable day – actually reaching Gold standard.