I had a long trip down yesterday, making a detour to fetch my new Tudor gown for my re-enactment group, The Tudor Players. The picture shows a rather different me from the usual walking gear! 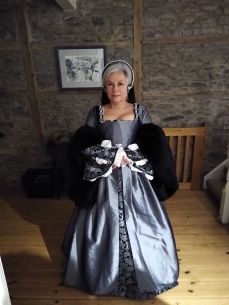 The weather was pretty foul, and the forecast was worse.  On the upside, I am staying at a gorgeous AirBandB in the little city of St David’s –  one of the nicest places I’ve stayed on the whole walk, and I also have the pleasure of friends joining me.

Jessica, Tom, Graham and I set out in two cars this morning around 9.30. We dropped one at Pembroke Dock, after observing the astonishing cheapness of the petrol. Perhaps it’s knock-off from the refineries. We drove on to Angle and left my car there. The walk itself was not hard – up the estuary, on flattish ground, the path weaved between shorelines, woodland and farmland. There was a splendid selection of bird life. Widgeon, pintails, sheldrakes, dunlin, oyster catchers, curlews, meadow pipits, gulls and turnstones – all pointed out to me by the birders amongst us, although I am getting good at some of these myself now – birds with red legs are no longer a mystery and I can tell a duck from a gull at fifty paces!  We dawdled for the first couple of miles to admire them.  Angle Bay is a lovely, sheltered inlet. The weather was soft and misty, the water still and sound muffled, giving a faintly otherworldly air to it. 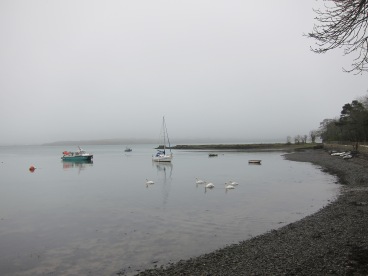 It was hard to believe that we were close to the massive refineries and industrial complexes of Milford Haven.  Once round Angle Bay, the path meanders inland behind the huge Pembroke refinery, which, astonishingly, is cheek by jowl with a 14th century tower house.  We could see Fort Popton on the headland, built for defence during the prime-minstership of the bellicose Lord Palmerston – he of the gun-boat diplomacy. Because of the lie of the land, the refinery was surprisingly invisible as we passed east and south of it, although when we came round Pwllrochan Flats, we passed under the pipes.  Once away from the shore, the path went into woodland,

It was easy walking, other than the claggy mud, which was particularly bad after we climbed inland from the refinery. 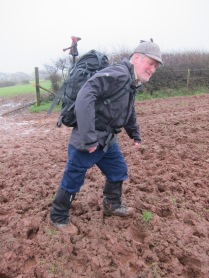 I had over trousers on but my trousers are still caked with mud to the knees. Spring has come early to Pembrokeshire, and there were swathes of snow-drops in the wooded sections.  We passed the old St Mary’s Church at Pwllchrochan, which is now a private house. It has the distinctive spire atop a square tower of the district. 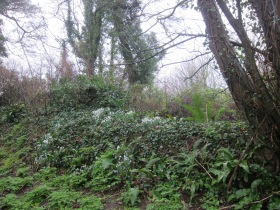 One of our number took a different, slightly shorter road route after hurting his ankle so we arranged to pick him up in whichever pub he first got to in Pembroke, after the rest of us had gone on to Pembroke Dock to fetch the car.  By the time we had walked at least two miles through the rather unappealing backstreets of Pembroke Dock it was dark. We did not have time to visit the castle, but since I saw it on my last trip up here, I did not mind.

13.6 miles and a silver day – the company compensating for the dull weather and lack of views.