I’m so glad we made time to go to Evensong yesterday. It was Candlemas, and the service was an absolute delight.  All the electric lights were switched off, and we processed through the stunning cathedral, each member of the congregation holding a candle.  There was a real sense of tradition and community in the service, which was conducted in both Welsh and English, with a bit of Latin thrown in from the choir.  If you are interested in the cathedral, I’ve written a bit about it over at my history website – link here. https://bit.ly/3bZcAZZ

Another short walking day, as most of us needed to leave to get home at a reasonable hour for work the next day.  We drove up to Martin Haven, and began walking around 11.30. We were finished and had eaten our sandwiches by 2.30.

It was almost as windy as yesterday, but once we had came in east from the headland at Martin Haven, we were more sheltered.  In the carpark, an ancient stone has been set into the wall. It is one of some thirty ring-stones found in Pembrokeshire. 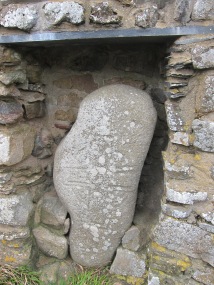 The carving, a Celtic cross, dates from 7-9th centuries AD – the period when the Celtic church flourished along the Irish seaboard as monks travelled to and fro between Wales, Ireland, Cornwall and Brittany.

A different type of shipping surrounds the headland today – we could see several tankers, waiting to take their turns loading and unloading at Milford Haven – this stretch of St Brid’s Bay, being, presumably, calmer water than the open sea.

Shipping in St Bride’s Bay, waiting to go into port.

It was easy walking along a flat cliff-path. Once again, there was thick lichen on the stones, denoting clean air. Tom and Trevor were busy with their binoculars, but I did not recognise anything beyond gulls.  As we came toward St Bride’s the silhouette of St Bride’s Castle was visible on the right. Now a luxury time-share, it was built in 1833, in gothic revival style, on the site of an earlier property. The estate is surrounded by a long dry-stone wall, buttressed against the wild wind.

Wandering unfettered on the cliffs nearby were little Welsh ponies – standing braced with their rears into the wind.

4 miles and a silver day to round the weekend off with.