Today has been pretty hardcore. Not the very hardest day I have ever done, but definitely in the top five, perhaps even the top three!

We managed to start a bit earlier today. Rachel had a bus to catch to get back to London for work tomorrow, so we had an earlyish breakfast and set off a few minutes before nine, fortified with an excellent meal including including Cornish pudding –  a sort of sausage but very peppery.

I slipped a Cornish pasty and some lemon cake into my rucksack. I was so full from last night and breakfast that I contemplated not taking lunch but everyone warned it would be a long tough day. The weather was blustery as we set out, blowing foam like confetti onto the land. 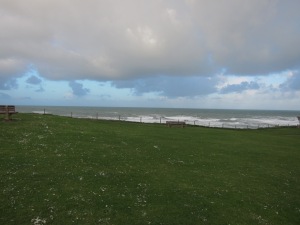 The wind has been strong all day but although a few squalls crossed onto land, they were behind us, just giving us the odd shower. Not enough to get really wet.

What has been so tough are the relentless ups and dens. At least twelve times we climbed down steep slopes or staircases from the top of the cliffs to sea level, and up the other side. Absolutely exhausting, especially as the wind was fierce at times, although blowing us onto the coast rather than off.

We could see Lundy getting and at the end of the day it was plain visible whenever the clouds rolled back, although it frequently was obscured by clouds.

Around 2pm, we finally left Cornwall and crossed back into Devon. The Cornish coast has taken me twenty-three days to complete – definitely the longest county coast so far. 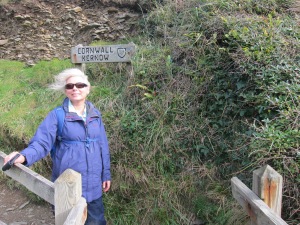 Above the long valley leading into Welcombe Mouth beach, we came to the writing hut of Ronald Duncan. I had never heard of him before, but Duncan was an important playwright and poet from the mid-twentieth century. Duncan was a pacifist and a conscientious objector, who, before the Second World War worked with Benjamin Britten, and is best known for writing the libretto to Britten’s ‘Rape of Lucretia’.  During the war, he began a co-operative farm near Welcombe Mouth, although not with conspicuous success. His little hut, which must have taken huge grit to complete, as all of the stone would have had to be dragged up or down a precipitous slope, made a welcome retreat from the wind. 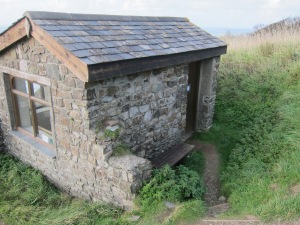 Unfortunately we could not book anywhere to stay in Hartland Quay (the nearest settlement to the path), so had to go several miles inland to find one. It was getting dark and we were exhausted, so my navigational error that took us nearly a mile out of our way was not my finest hour. I must say,  Jon and Chris were very forgiving!

Pleasingly, we have a little suite to ourselves, and my bathroom has an enormous bath and numerous fluffy towels. Our hosts gave us a lift to and from the pub, for a rather indifferent meal.  I am now about to plunge into the aforementioned tub.