Today, I was out for 12 hours. Unfortunately, only five of them were spent actually walking – the rest was waiting for public transport to arrive, sitting on public transport whilst it went nowhere, and getting to and from public transport. It has been great staying with a friend as a base, but, practically speaking, it gets very hard as you get further away, even though, in theory, there is plenty of public transport in this area of South Wales.

Things began well enough – local train to Bristol Temple Meads, mainline train to Newport, change to Bridgend and a walk to the bus stop. En route, I stopped in a local café to buy a coffee – I try to avoid chains and patronise local businesses. As I queued, the man ahead of me turned around and said:

‘I don’t know why two of them have to come to the counter. They’re only gossiping – why can’t one sit down and the other get the order?’

I made a murmuring noise.

‘And why do they have the kitchen upstairs here?  There’s plenty of room for it down by here (or by yur as it is pronounced in the Valleys) – it would be much better.’

‘It’s a wonder how ignorant some people are. A few years ago, I had to have an operation to cut a cancer off my ear’. He turned his head to show me his right ear.

Murmuring didn’t seem enough, so I graduated to ‘Goodness’.

‘The doctor I saw, he’s my neighbour. I told him he needed to mend the fence.  He said it wasn’t his fence. Of course it is, I told him. The posts are on your side. An educated man and he didn’t know whose fence it was. It wasn’t as though he’d only been there a minute. Five years he’d been there, and didn’t know that.’

Lost for words, I repeated ‘Goodness’.

‘There’s a shop down by here, got a massive glass window it has, and they’ve gone and put a great big sign in it. Why do they want to spend all that money on the glass, and then cover it up?  Two fish and chips, and I’m sitting upstairs,’ he said to the woman at the till, plonked down his money and walked away.

After this entertaining slice of local life, I got on the bus and hopped off near the pub we ate at yesterday. The other passengers had a discussion about the best place for me to alight, to find the footbridge over the Ogwr river. There are stepping stones as well, but seeing it has been so wet, the bridge seemed the better option.

I found it easily and walked over the water meadows – heavily pocked with horse hooves. The ruins of Castell Ogwr are impressive. Built in the early 1100s, possibly by the de Longmore family, it came into the Chaworth family and thence to the duchy of Lancaster, and then the crown after Henry Bolingbroke took the throne in 1399. It was still in use in the nineteenth century. On the other side of the Ogwr is the delightful village surrounding the ruins of the de Cantilupe manor of Candlestone.  I did not divert to see the ruins, but enjoyed the p 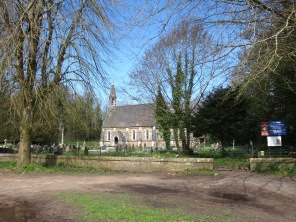 retty houses, the church and the spring flowers in the bright sunshine.

The track moves through a woodland to the high dunes of Merthyr Mawr – the path was fairly clear, although difficult to walk on, because trotting horses had created deep pockets in the narrow path.  After a mile or so, the path comes to the beach. The tide was way out, so I could walk across the sands all the way to Porth Cawl – there is one headland where it is necessary to climb up onto the prom, but otherwise, if the tide is low, you can walk across both bays at Porth Cawl – I really enjoyed this huge expanse of firm sand even thoug the sky lowered somewhat.

At the old dockyard, the warehouses have been turned into a row of eateries, and I had an excellent lunch – the staff did no more than glance expressionlessly at my muddy trousers before seating me.

After Porth Cawl, the chimneys of Porth Talbot steel works become visible – puffing the steam that I could see last summer from the Devon shore. Devon itself was very visible – the peaks of Great Hangman and Little Hangman, where Rachel and I were in July, and even the tip of Ilfracombe.

The walk continued at the edge of the beach, and partially on the shore itself – wide sands, with some rocks, and a golf course to the inland. This eventually turned to sand dunes at the Cynffig Nature Reserve, which apparently is one of the most diverse habitats in Wales, although I saw little other than grass and gorse. I navigated successfully across (previous coast walkers have complained of getting lost, so I think the authorities must have increased the number of marker posts). 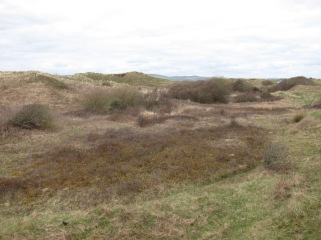 I landed at Mawdlam at around 3.45. I would like to have gone further, but had to stop in a place where I could get a bus back to Bridgend. I didn’t get back to Bristol until 7.45 – very frustrating. I can’t face similar complications tomorrow, as I would only be able to walk for a short while anyway before heading home, so will leave the next section until I have a plan to walk from place to place again.  10.6 miles and a bronze day.