We had a great celebratory meal last night, at an Italian restaurant in Mumbles, and I confess I was a little heavy-headed this morning. We hoped that today might be the lucky day for finding an 11 o’clock coffee stop, but alas, no joy.

We left one car near the station at Gowerton, then came back to the pub we finished at yesterday, and turned off down the lane where, had the sea wall at Cwm Ivy still been intact, we would have emerged from the salt-flats. To begin with the walk meandered around the flats again, but then entered farmland and some pleasant wooded areas.

However, it was not long before the path joins the road at Crofty.  We arrived there around 10.15, but neither pub was open.  The door of one was actually open, and a lady was laying tables, but she did not feel able to serve us coffee – nothing could be done before twelve.

Somewhat disgruntled, we marched on. Before long we saw a hiker coming towards us and stopped to talk. She is doing the Wales Coastal Path, but in the opposite direction. We talked about the optimum number of days to do on a trip. I said that in some ways, I’d like to do a really long chunk of two or three months, but that in fact, the longest stretch I have done was two weeks, by which time I was thoroughly fed up.  Her advice was that, once you push through the two-week mark, walking becomes your life, and you sink into it completely.  Not sure – one to think about if I have an extended period of free time – not likely in the immediate future.

The road was quiet to begin with, but became busier.  In parts, you can walk to the side on the old railway track, now a cycle-path, which used to serve a branch line from Gowerton to Penclawdd, initially installed to move coal from the mines in the Morlais valley. It is hard to believe there were once mines in the Gower – the Welsh Development Agency has done a fantastic job of removing all signs of this once pervasive industry.  Before the railway, there was a canal, which brought coal from inland to the dock, for transport to sea-going vessels.  There is the merest ghost now of the dock to be seen at low-tide. 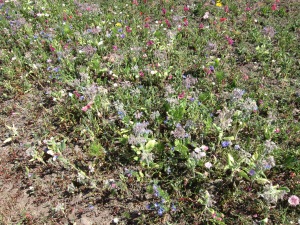 Some effort has been made to make the route pretty with wildflowers, and it was good to see across the estuary, but after yesterday’s gorgeousness, today was bound to be a bit tame. Nevertheless, the weather was pleasant, and having my brother-in-law for company made it a silver day.