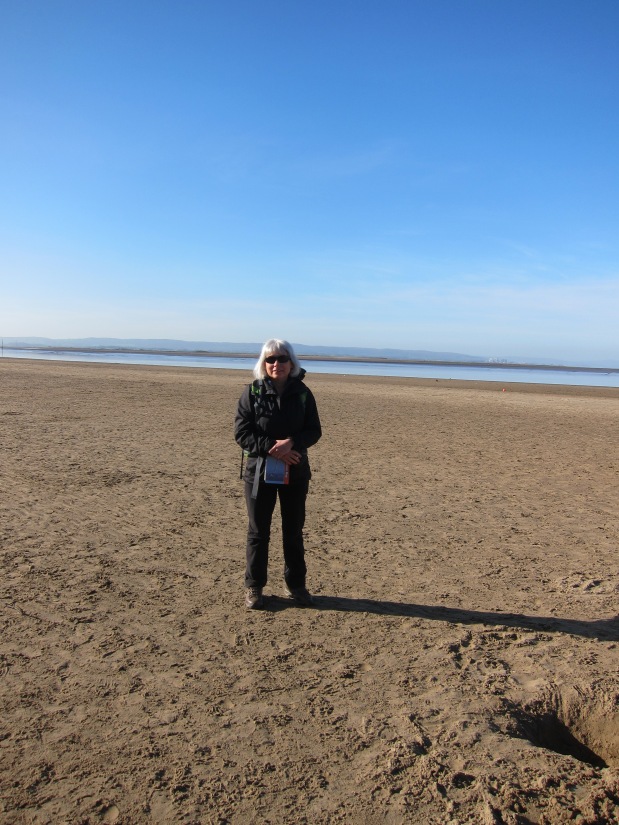 When I looked at the weather forecast last week, it suggested heavy rain for today, but it could not have been more wrong. It has been a glorious day – bright, sunny, warm and not a breath of wind. 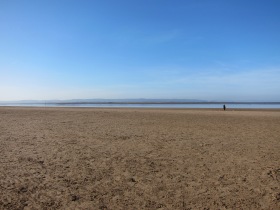 adful service) to meet Jane at the Pavilion on the waterfront at 9.30. We had a dismal breakfast there – grease on toast – but that was the lowest point of the day.

The tide was far out and we walked across the firm, dark gold sands all the way to Brean Down. I knew that to cross the river Ax we would have to go a long way inland and we debated not climbing the headland because we would have to retrace our steps for a couple of miles, but the weather was so good, we were making such good time and the views promised to be so spectacular, that we decided to climb the steep staircase up to the long hogs back.

It was certainly worth it. The views were superb. 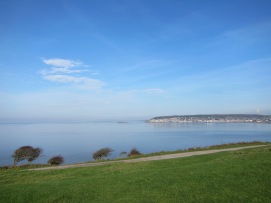 All the way back to West Quantoxhead,  hazy in the distance, and the long flat expanse of Brean sands to the south, then the delightful villas of Weston to the north. The Down is the last outcrop of the Mendip Hills which we could see rolling away east. We descended and had a quick cream tea in the NT café at the bottom. 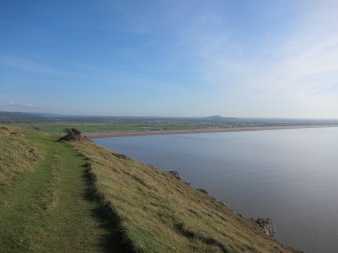 We walked back along the beach, planning to emerge onto the road towards Wick Farm where the path joins the road to cross the river. We undershot a bit and had to walk along the lane, which was astonishingly busy. Since my map was printed, the Sustrans route has been built, saving us from a long road bash as it is a firm track, a few yards away from the road. I was delighted to discover that the previously impassable crossing at the old sluice has now been modified to carry the path across the Ax. We strolled along, enjoying the sunshine, talking to the various dog walkers, and eventually emerged at the village of Uphill, with its ruined, church high above the road and the remains of quarrying underneath exposing the limestone rock, almost vertical, but dotted with Welsh (according to the sign) sheep, well adapted to steep rocky hillsides.

Then it was back to the b 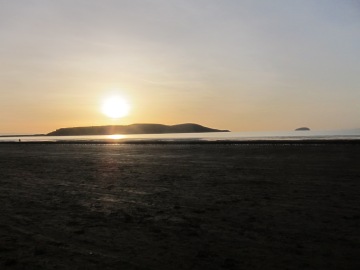 each and a long walk up to the middle of Weston-super-Mare, admiring the Holm islands (Steep and Flat) and Brean Down behind us.

Less pleasurable was trying to find my aunt’s house where I am staying, when the satnav refused to recognise the street name, although it has been there long before Google was ever born or thought of. After some fraught backwards and forwards along the same lane and a few dead ends, we made it.

14.4 miles. Legs are getting very achey – disappointing as only day 5.

All in all, a golden day. 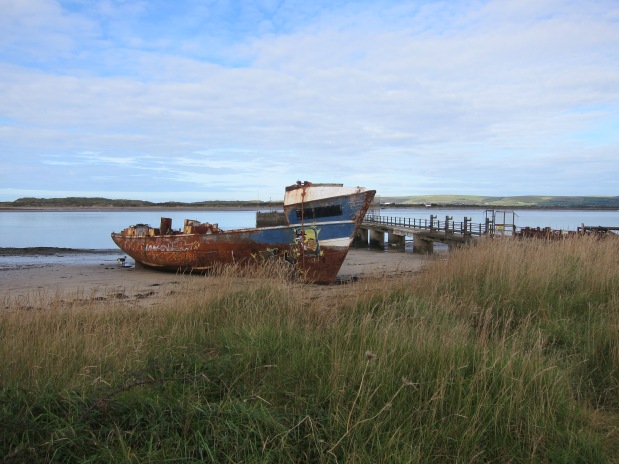 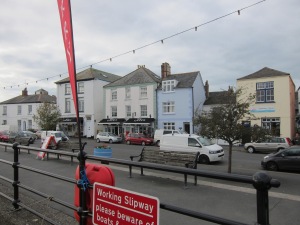 Today was a good day to end the trip.  We left our very nice B & B (excellent breakfast of smoked salmon) and walked back into the town to rejoin the path. We wound through the edge of Westward Ho, into the little village of Appledore, with its lifeboat station and prettily coloured houses.

Appledore is an old harbour, used for years for salmon fishing. It is the location for the ferry across to Instow. There was a slight hitch when Chris realised he had forgotten his phone.  A frantic call to the B & B arranged for Mrs B & B to drive round to meet us on the other side of the ferry with the offending article.

We had an excellent coffee in the wholefood café and shop at Instow whilst Chris’s phone was en route. Although it was early for elevenses, the cake looked extremely yummy, so we took the opportunity to load up on calories early. Not that today’s walk was difficult – it took us along the south bank of the River Taw, which meanders gently into Barnstaple, with mudflats, marsh and various bits of old engineering to interest us, particularly the old Instow railway station, on the route between Barnstaple and Fremington. 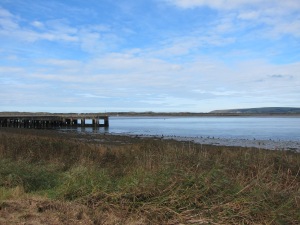 We watched some workers fixing the old railway bridge crossing an inlet. They had their work cut out – every time they tried to push the full barrow up the bank, they slipped and slid in the mud. We marked them for barrow-running technique as we munched our lunch. The older chap had more technique, the younger ones, brute force.

I was delighted to find two of the Sustrans cycle way markers, that I haven’t seen for ages. There were loads in Kent, but they have been few and far between since.  Like most flat journeys, the walk seemed to take a longer time than expected. 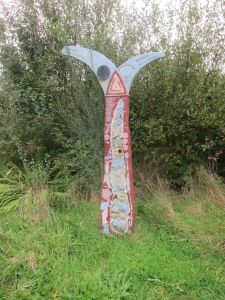 We arrived in Barnstaple at around 4pm. Jon and Chris elected to call it a day, as Jon is now going inland to pursue his end-to-end journey by going across Exmoor and has refused to accept my pleas to divert to the coast as it would mean going west again. I decided to continue along the north side of the River Taw as far as Braunton.  Other than crossing the modern road bridge, which saves a good mile on going into the town to cross the old bridge, It was a very dull walk, mostly paved, and there was a rather creepy bloke on the path who kept stopping, then when I passed him, started again, passed me and stopped. But he didn’t actually say or do anything. 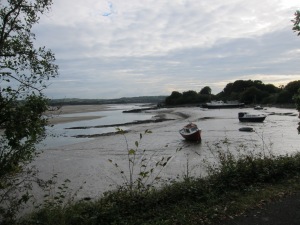 I popped up onto the main road just outside  Braunton and got a bus back to Barnstaple. We are staying in an enormous old rectory, high up in the attic.  Doing the extra to Braunton also gave me five more miles, bringing the day to 22, the longest I have done since the crazy Seaton to Exmouth stretch on Day 28.