I am so glad to have met James and Anita. Apart from them being extremely interesting and nice people, we were able to circumvent the difficulties of Sunday public transport in Wales. There is a ferry from Glan-y-fferri (who’d have thought?) to Llansteffan, so we decided to begin walking there, and left one car at Talcharn/Laugharne, underneath the imposing Anglo-Norman castle. The countryside is littered with these twelfth-century strongholds, built by the Marcher lords who had licence from William the Conqueror to take as much land from the Welsh as they could and hold it on terms much less onerous than the land they held from him in England. Talacharn castle is more-or-less opposite Cydweli, where we had tea yesterday. The pair of fortresses guard the entrance to the Tywi estuary.

Llansteffan is a lovely little village. We arrived about 9am and set off towards the shore. We agreed to walk separately, as I am slower, and it is very tiring to walk at someone else’s pace. Just as we left the village, we could hear the church bells ringing and see yet another castle.

The sky was blue, the view over the estuary was amazing, across Cefn Sidan, all the way back to Llanmadoc, and the Worm’s Head beyond. The path starts by running through woodland – my favourite kind of walking – woodland overlooking the sea. 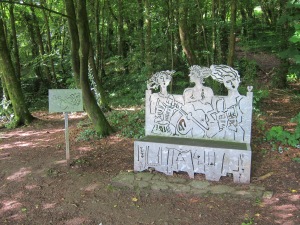 After a couple of miles, the track turns inland, up yet another estuary – this time the Tâf. The walk was largely uneventful – more road walking than is entirely pleasant, my knees do not respond well to tarmac. The poles seem to help, though. By and large, the signposting is good. Carmarthen, like Newport, has the tops of the fingerposts in bright yellow, which helps. I admired a flock of domestic ducks in one field (although Anita told me later they were geese). Surrounded by buttercups they had the air of an advertisement for wholesome food.

Passing that farmhouse, the signage was not brilliant. One gets the impression that some of the landowners are not that happy to have the Coastal Path traversing their fields – poor signs, unoiled gates, bullocks in the field etc, often give the impression that walkers are not welcome. I cannot help thinking that they get the money, so should be a little more accommodating. Of course, many farms are well-arranged for walkers.

Ducks or geese, on a farm near Tâf estuary.

Having looked at the map, it seemed to me that a short-cut was possible – rather than following the official path for about a mile, another public footpath served as one side of a triangle. Sadly, short cuts always mean long delays. The field, although a public footpath, was wall-to-wall bovines. Not just a few, but scores.  All far too interested in me. I trekked to the side of them, and entered another field – I could see the path about 200 yards away, but there was no way out of the field without going through the cattle. I turned back and took the official route. It went through another cattle field, but they were tucked into one corner, and rather more docile. I crossed a couple more fields, lots of grass, presumably for sileage, and sat down to eat my lunch. I discovered later that James and Anita had stopped in exactly the same spot!  Several fields later, the path decanted onto a minor road. As I turned left, I could hear ferocious barking.

Dogs, unlike cattle, do not bother me, but the two that came trotting out of a farm yard, onto the public highway were ugly customers. One was a labrador, normally a docile breed, and the other a collie. They were not docile at all. They barked and snarled and circled me. The worst thing is to show fear, so I breathed slowly and began talking to them,  in both English and Welsh, although I kept my poles in front of me. The lab looked as though she might have pupped recently, so perhaps she was feeling protective.  I struggled to pass them.  Then they began to calm down as I kept talking as soothingly as I could. The lab came close and wagged her tail, but I was not going to fall for that and try to pat her.  I hit on the idea of throwing the apple I had been eating, in the hope they would bound off, but only one fell for it – I was now trapped with one in front and one behind. Not such a good plan. They then bounced ahead and to my left. I hurried past and arrived at a farm gate. Clearly, I had missed the path. A young girl pointed in the right direction (the opening the dogs had shot down). I thanked her, and observed that the dogs were rather fierce to be allowed out on the road, but she obviously could not care less.  The brutes had raced off by now, but I was glad to nip down the path and clang the kissing gate firmly behind me. More open fields took me into St Clears.

There was a lot of interesting information about the industrial past of the estuary – it is almost impossible to imagine these quiet, rural areas as once having been hives of industry.

The path runs alongside the main road, but a lot of effort has been made to keep the track safely behind the hedge. It then diverts through more fields, used for trail bikes, it seems, and then some of the loveliest fields of the day. I suppose they are ‘set-aside’ land, as they were brimming with wildflowers – buttercups, grasses, yellow-rattle, flag-Iris, red and white clover, all a-buzz with insects, including bright blue damsel fly-type things, bees, butterflies (although not so many of them as you might expect). Butterfly in Welsh is pili-pala – one of my favourite words.

Set aside farmland, near St Clears, full of flowers and grasses.

Passing through several fields, you could tell which had been set-aside longer, and which were perhaps in the first season. There was another strip of woodland, overlooking the estuary, then down a lovely green-lane, before entering the well-kempt wood just north-east of Talacharn, which is, of course, famous for Dylan Thomas having lived there. I know it is sacrilege, but he is not one of my favourite authors, so I did not detour to see his writing shed.

I arrived back under the castle at about 4.30.  Most of the tea-shops were no longer serving. Query, why would you turn away custom on a sunny Sunday in June?  The season is not that long, surely you want to make as much as you can?  One was open, offering an interesting fusion – Asian street-food and tea and cake. Excellent lemon drizzle. Knees a bit grumpy after so much road walking.

Cat has returned, having ignored me last night. Unusually for me, I have a massive blister, just where my right instep meets my heel – my sock must have got a fold in it.  Shan’t be bursting it though. Hopefully, it will subside overnight.